Your chance to contibute

Here is an alternative to the classic Racing and Assigned Area task formats. The principle of InFlight Tasking (IFT) is that the pilot can develop a task while in flight, depending on how conditions develop on the day. But it is not the same as the free flying that On-Line Contest (OLC) recognises, because there are a number of constraints to push pilot development.

The aim of IFT is to allow the best use of the flying day - even if the weather does not turn out as expected - while still stretching the pilot's skill and ability. And be less dependent on accurate tasksetting. In fact, the Pilot develops the Task. And when the easy options are used up the Pilot must make some other choices about where to fly next.

Here's how it works. The start and finish points can be any existing waypoint, or normally the launch and landing point. The start has a 3.0 km radius on the launch point at (O). The first turn point is a completely free pilot choice and is selected after launching.

Normally the Pilot will fly in the direction of the most promising lift and may choose to "collect" turn points along the way in case the more distant turn point cannot be reached. When uploading the flight, the turn points collected are used to define the flight. It seems obvious that the furthest might be selected, but depending on the “sectors” described below, an out of way turn point may be used instead. The start waypoint could also be changed to make subsequent turnpoints work.

Fig 1: The Pilot has flown from Papawai (O) in a north-east direction, following the green dotted line, and passing within 0.5 km of Gladstone, MS Ponds and Bennetts Hill. After arriving at Whangaehu (and clipping the 0.5 km circle) the pilot decides that further flight in this direction is not possible due to lowering cloud base, so Whangaehu will be the first claimed turnpoint. 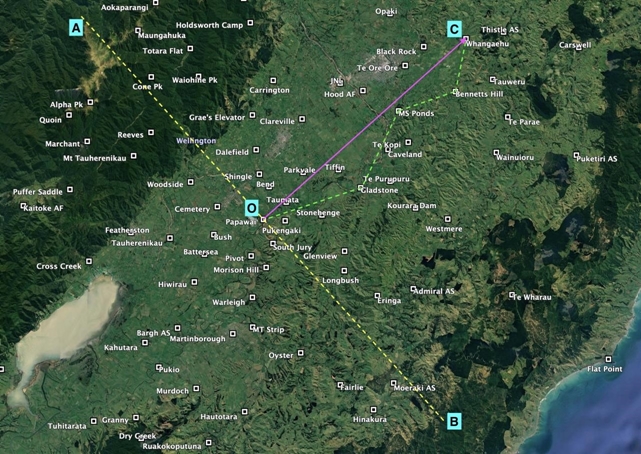 Here's where it gets interesting. The in-flight choice of a second turnpoint must be "on the other side" of the start point. This is represented on the above diagram by the line (AB), which is 90° to the line (OC). OC is the straight line from the centre of the start circle to the first turnpoint.

Let's say the Pilot decides to move east and follow a promising convergence, all the way south to Oyster and beyond. This is shown on the dotted green line below in Fig 2. There is no point in collecting any more turnpoints until crossing the line AB, as Whangaehu is still the first turn.

Oyster is within the allowable sector for a second turn, and three options exist:
- fly further south and try for Hautotara and maybe Ruakokoputuna
- fly back to the start/finish point and claim a triangle flight (2 turn points, 30+40+15 = 85 km) - fly to a third turnpoint at least 90° from both of the first two turnpoints

Fig 2: The Pilot elects to push on to Hautotara, but Ruakokoputuna is out of reach as the sea breeze has pushed in. After trying for Murdoch the Pilot heads for home. This task would be scored as a triangle, being Start-Whangaehu-Hautotara-Finish = 30+48+22 = 100 km 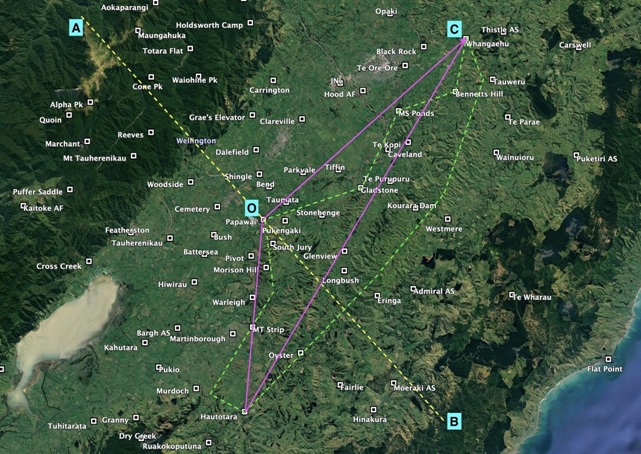 From Hautotara there is still the possibility of adding a third turnpoint, but this would need to be 90° away from both of the first two turnpoints.

Fig 3: The Pilot turns at Hautotara, but on the way back to Papawai finds the lift stronger than expected, so looks for a way to extend the flight. A third turnpoint is allowed within the sector (AOD), such as Puffer Saddle, Cemetery and Woodside. The Pilot finally turns at Woodside and heads for home. Distance = 30+48+26+9 = 113 km. 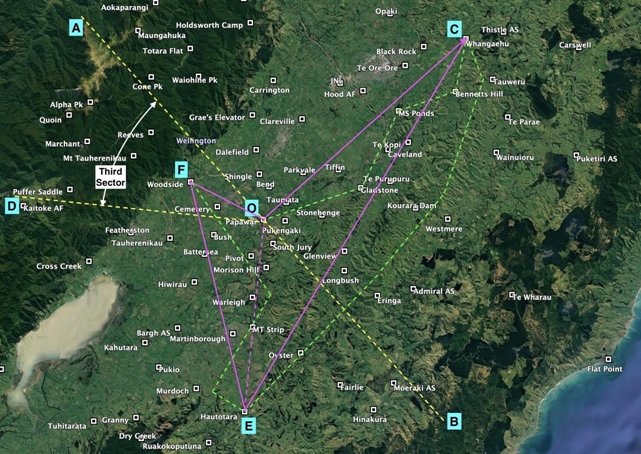 Note that a third turnpoint must be on the south side of AB, and also north of the line DO, which is at 90° to the second turn point. The intention here is to get completely away from bashing up and down (or around and around) the strongest energy lines. Pilots eventually get bored with this, and then lose interest. Under IFT rules a Pilot may well zoom along known energy lines, but will then have to fly somewhere different (and more challenging) - perhaps counting on a convergence setting up to ride home on, or a sea-breeze front arriving at the right time.

The only way a 3rd turnpoint would become impossible (or very difficult) would be if the 2nd turn was opposed 180° to the first. And that's the penalty a pilot would pay for choosing a double outand-return along a straight line. A double O&R is definitely allowed, but there's a trade-off in that it would cost the pilot the option of a third turn. Choose carefully!

The whole point is that for a long flight you have to go a long way from the start/finish, not tootle around locally in easy or known lift. The idea is to reward pilots who stretch their distance, whether in 1, 2 or 3 directions.
Top
Post Reply
1 post • Page 1 of 1