Your chance to contibute

How often have you set yourself a task which you believe will make for a great flight, and as you approach the first waypoint you are disappointed?

One of two things has happened:
Disappointing and discouraging either way.

In Flight Tasking – IFT – is a new technique we have introduced into taskPilot to try and overcome this issue.

Put simply, it is a scoreable flight where you develop the task as you fly it!

There are a few wrinkles we have introduced to make it challenging, but that is the basic description.

By flying an IFT task, pilots will need to perform basic pre flight planning based on the weather forecast, and continue to plan throughout their flight as the weather evolves.

Importantly, every flight should be able to be scored. Previously an abandoned task could only be posted as an unscored free flight.

You fly a start, finish and up to 3 turnpoint task using your club’s waypoints. To make it challenging, the flight must visit waypoints in sectors around the start point as described below.

The first sector is determined from the first turnpoint you fly to. For example, you believe North is a good way to start, so you fly generally towards wp8 and wp9. On the way you collect wp4, wp7 and wp5. 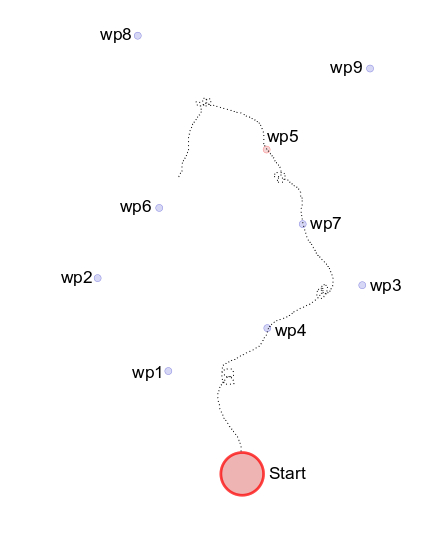 Attempting to reach wp8, you decide you can go no further and choose wp5 as your first turnpoint. This choice sets the first sector, which is defined by a line perpendicular to the Start-wp5 line, drawn through the start waypoint, as follows: 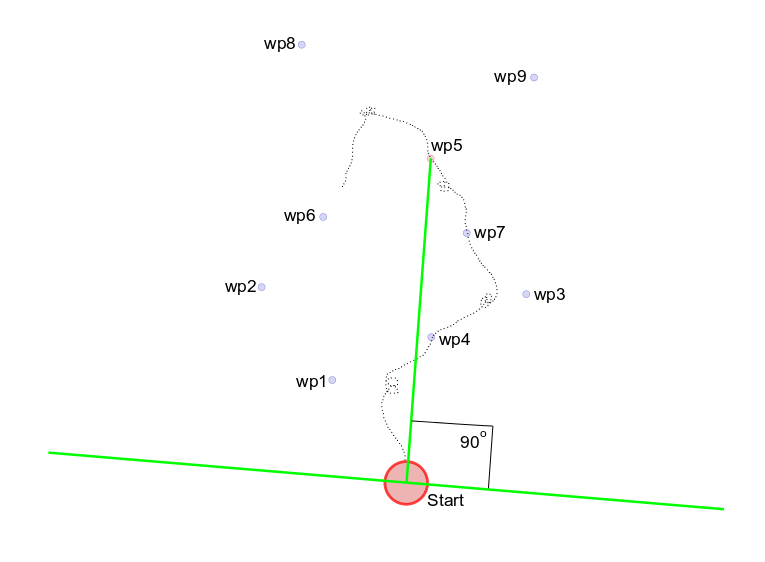 To claim another turnpoint you must fly across this line, so wp6, wp2 etc are not selectable.

Flying southwards you collect a few waypoints along the way - wp11, wp10 and wp13 – until you reach your limit and choose wp13 as your second turnpoint. 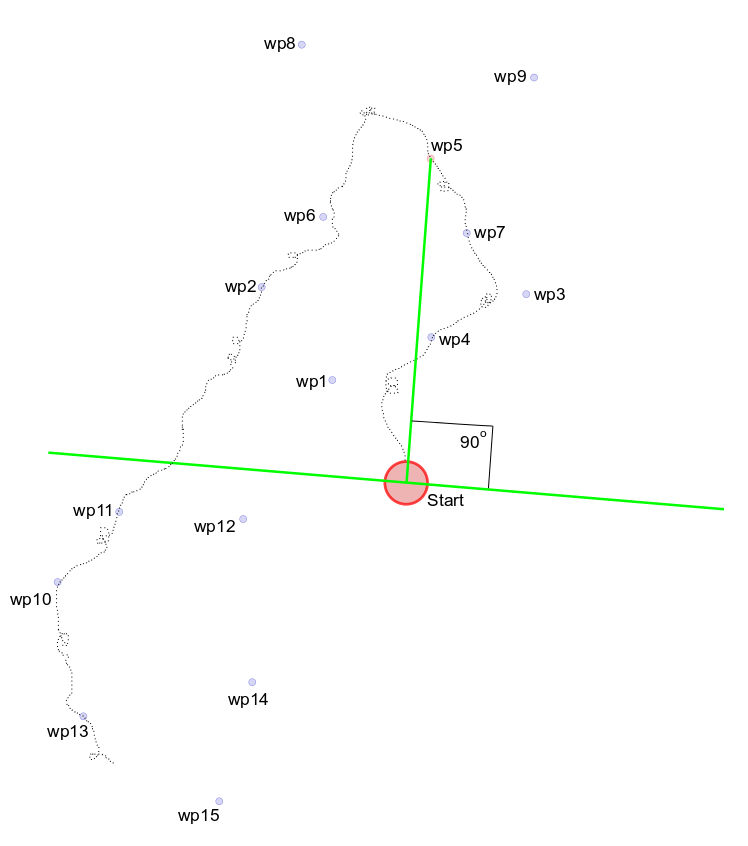 Selecting Wp13 as the turnpoint determines the second sector, drawn as before through the Start, and now available waypoints are only those in the remaining space between sector 1 and sector 2, shaded in green. 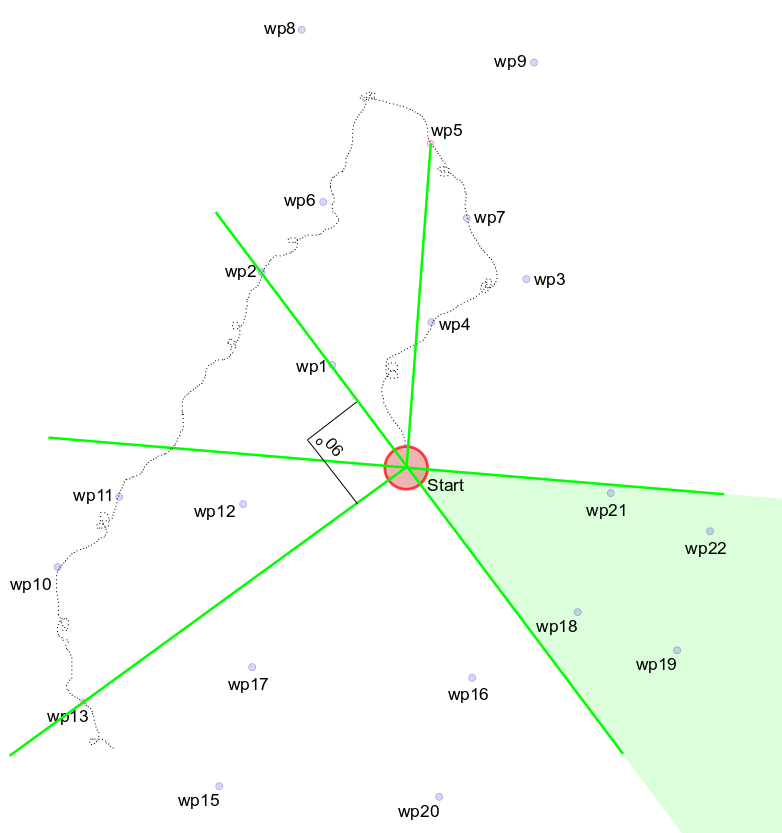 Collecting wp18 you fly to the finish, in this case the same waypoint as the start, completing the task as shown. 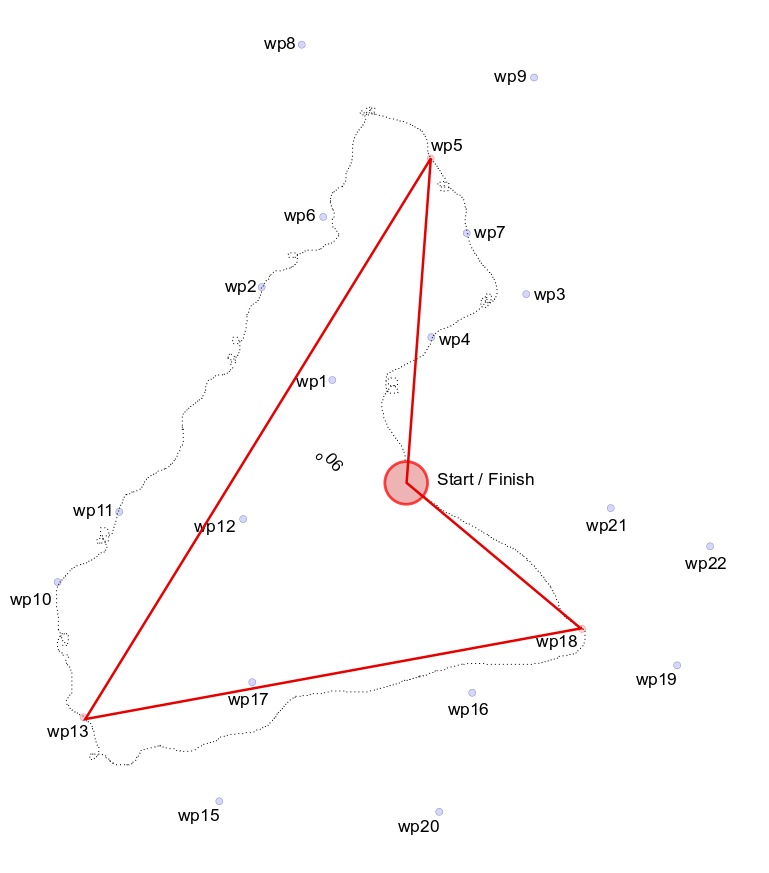 This flight can now be loaded into taskPilot and scored as a racing flight using the IFT flight upload option.

As part of the upload you enter the turnpoints to construct the task and they are checked against the sector rules.

If your task fails to meet the sector rules you can change the task turnpoints, hence ‘collecting’ waypoints along the way as a safety measure is a good idea.

If you had failed to make wp18, and didn’t collect any waypoints in the final sector, you could still claim a 2 turnpoint triangle task flight. Indeed, if you only collect one waypoint on the entire flight, you can still claim an out and back flight to that turnpoint.

The start and finish don’t have to be the same point, so after the flight, you might be able to construct a higher scoring flight by moving the start or finish points to one of the waypoints you collected.

The future for IFT

IFT is very new and only a simple version has been created so far, using trial and error will determine what is best to do next.

For example, the height penalty isn’t used – this will be introduced as that makes the Start waypoint selection important. Some ‘off tow’ detection might also be introduced.

Work is underway to integrate IFT flights into contests and the club league.
Top
Post Reply
1 post • Page 1 of 1